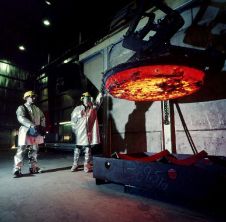 Two separate processing schemes are utilized for niobium production. Those companies that mine pyrochlore convert the niobium oxide units into HSLA ferroniobium through the aluminothermic reduction process or by reduction in an electric arc furnace. CBMM has installed capacity for the production of a high purity oxide that can be used to produce vacuum grade ferro- and nickel-niobium as well as niobium metal ingots via electron beam refining.

The use of columbite and tantalum-bearing ores, such as tantalite, as feedstocks results in the necessity to process these materials chemically as described in the tantalum section. The purified niobium-containing process stream is generally converted to niobium hydroxide by the introduction of ammonia, followed by washing, filtration, and calcining to the oxide. Purities exceeding 99.99% can be achieved.

The various metallurgical products are generally produced from electron beam or vacuum arc melted niobium ingot. Double and triple melt ingots achieve a very high level of purification with respect to metallics and interstitial elements. Ingots are used to produce niobium alloys such as niobium-1% zirconium, niobium-titanium, C-103, Inconels, and others.

Several capacitor manufacturers are developing capacitors using niobium metal powder or niobium oxide, and these models are gradually being brought to the market.