Who was Anders G. Ekeberg?

Anders Gustaf Ekeberg was born in 1767 in Sweden. He was a Swedish scientist, mathematician, and poet.  He became a professor at Uppsala University in 1794 and initially made his name by developing advanced analytical techniques and by proposing Swedish names for the common chemical elements according to the principles set out by the "father of modern chemistry" Antoine-Laurent de Lavoisier.

Ekeberg  discovered  the  oxide  of  tantalum  in  1802,  isolating  it  from samples  of  two  different  minerals,  specifically,  tantalite  from  Kimito, Finland and yttrotantalite from Ytterby, Sweden.

According  to  Ekeberg’s  friend,  the  chemist  Jacob  Berzelius,  Ekeberg chose the name ’tantalum’ partly to reflect the difficulties that he had experienced in reacting the new element with common acids and partly out of his passion for ancient Greek literature. Tantalus was a demi-god who  killed  and  cooked  his  son,  Pelops,  and  as  punishment  was condemned  to  stand  in  a  pool  of  water  beneath  a  fruit  tree  with  low branches,  with the fruit ever  eluding his grasp, and the water always receding before he could take a drink.

Ekeberg suffered from poor health in later years and in February 1813 he died, unmarried, at the age of 46. 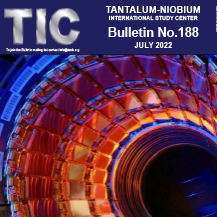